» Events » Europa Policy Lab: Populism in Europe: from the Left and the Right?

Europa Policy Lab: Populism in Europe: from the Left and the Right? 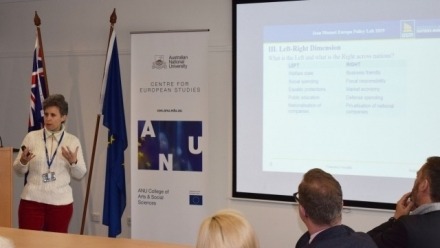 Elections in European countries have confirmed a surge in support for populist parties. Over the last five years voters across the European Union have demonstrated their increased preferences for populist parties in their countries: Poland, Hungary, Italy, the Czech Republic, the United Kingdom, and Austria among some of the most discussed cases. Political programs from populist parties seem to share similarities: anti-immigration statements, stronger border security proposals, corruption fighting plans or nationalist economic policies. As populist parties have been gaining in the polls, older parties on the left and the right of the political spectrum have been losing votes.

This seminar presented data on European Union member states and corresponding levels of populist voters. The seminar analysed and answered the following questions: Who are the populist voters in Europe? Where are they located the most geographically? Are they from the left as much as from the right of the political ideological spectrum? Which European parties lost the most voters to new populist movements? Empirical data from Europe in 2018 will provide answers to these questions and present the big picture about ideological positions and populism on the continent. The seminar concluded with a dialogue between Associate Professor Francesca Vassallo and Professor Daniele Caramani and then open discussion between participants.

Associate Professor Francesca Vassallo’s publications have focused on comparative political behavior, protest activism, French politics, European public opinion, and US-EU relations. In addition to publications like peer-reviewed journal articles and book chapters, she has served as a guest editor for special issues of German Politics and Society (2013) and PS: Political Science and Politics (2018). Her book France, Social Capital and Political Activism (Palgrave) was published in 2010. She is currently investigating measures of populism in democratic systems, with a particular focus on Europe.

Europa Policy Lab: Populism in Europe: from the Left and the Right? by ANU Centre for European Studies