» Events » Workshop: Barriers to and Priorities for International Trade in Services

Workshop: Barriers to and Priorities for International Trade in Services 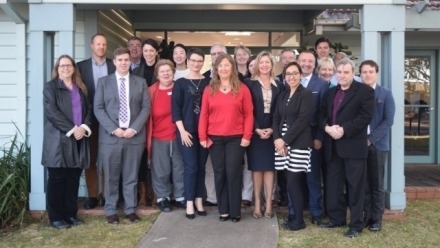 Participants of the Trade in Educational Services Workshop

This Jean Monnet workshop is supported by the Erasmus+ Programme of the European Union.

This Workshop brought together academics, policy-makers, trade negotiators, data specialists and trade consultants for an intensive discussion on some of the most important barriers to trade in services. Services form the largest part of the economy for Australia and for European countries. There is great interest in services trade liberalisation in the trade treaty that is currently being negotiated between Australia and the European Union (EU). Identifying priorities for liberalisation is important for both Parties.

The Workshop also reviewed the evidence from recently concluded EU trade treaties, including the Singapore, Canada and Japan treaties. Dr Deborah Elms from the Asian Trade Centre in Singapore discussed lessons from the services outcomes from the EU–Singapore treaty. She highlighted the importance of analysing negative lists to identify sensitive areas and she shared practical insights in critical issues which should be included. Dr Pascal Kerneis presented some interesting and useful perspectives from the viewpoint of European service industries.

Workshop participants focussed in on two particularly important service industries – education services and financial services. Experts from each of these industries joined us for these discussions which not only identified key issues for trade negotiations but also a range of critical issues that need addressing through domestic policy reform.

There were 6 international participants involved in the Workshop. They all made valuable contributions, and we would particularly like to thank them for making the long journey. They are:

Dr Pascal Kerneis, Managing Director of the European Services Forum (ESF) since 1999. Pascal is also a member of European Commission DG Trade’s Expert Group on Trade Agreements since December 2017 and has participated in WTO Ministerial Conferences as the Commission’s advisor. He is a regular speaker on trade in services and investment conferences and author of many articles on trade in services and investment related issues.

Dr Deborah Elms is Founder and Executive Director of the Asian Trade Centre, which works with governments and companies to design better trade policies for the region. Deborah is also a senior fellow in the Singapore Ministry of Trade and Industry’s Trade Academy. Previously, she was head of the Temasek Foundation Centre for Trade & Negotiations and Senior Fellow, International Political Economy, Nanyang Technological University, Singapore. Her projects include the Regional Comprehensive Economic Partnership, the ASEAN Economic Community and research into global value chains.

Professor Nazire Nergiz Dinçer, Department of Economics at the Turkish Education Association (TED) University, Ankara and Director of the TEDU Trade Research Centre. Nergiz’s research interests are international economics, economic growth and central banking and her research appears in journals such as Economic Inquiry, International Journal of Central Banking, Economic Modelling and Empirica. She has participated in projects on trade issues funded by TUBITAK, the IMF, the World Bank, and COMCEC. She is a co-founder of the Empirical Investigations in Services Trade conferences.

Dr Erik van der Marel is a Senior Economist at the European Centre for International Political Economy (ECIPE), Consultant Economist at the World Bank’s Trade & Competitiveness Department, and Associate Professor at the Université Libre de Bruxelles (ULB), Brussels. His areas of expertise are in services, digital and global value chain trade. He is currently manager of ECIPE’s Digital Trade Restrictiveness Index. Erik’s PhD in international economics is from Sciences-Po Paris. He has written many articles, including in peer-reviewed journals, book chapters, working papers and reports, as well as contributions to World Bank reports on services trade and regulations, digital trade and global value chains.

Maura Ada Décosterd is a trade policy expert with experience in economic and legal research and analysis. A political scientist by training, Maura has worked in academia, with international organisations and in government. Her expertise ranges from policy formulation to implementing trade-related technical assistance programmes. She has served as a Senior Trade Law and Policy officer at (the Economic Research Institute for ASEAN and East Asia (ERIA) in Jakarta. With others from Developing Trade Consultants she recently developed STRI data for Northern Ireland and applied this to assessing the impact of alternative Brexit exit strategies on Northern Ireland’s services trade.

Sam Rea is Trade in Services Advisor in the Trade Negotiation Division of the New Zealand Ministry of Foreign Affairs and Trade. While the negotiations for an EU-NZ trade treaty are separate but parallel to those for the EU-Australia trade treaty, there are many areas of mutual interest. Sam’s participation in the Workshop provided many useful insights from across the Tasman.