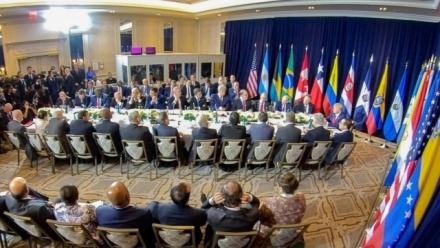 The voice and influence of Europe on the United Nations Security Council (UNSC) will continue to be strong in 2021‑2022 following voting by the 191-nation General Assembly in New York in June to elect Ireland and Norway. Both nations were successful in securing sufficient votes to win a two‑year non-permanent seat on the UNSC. They will replace Germany and Belgium whose terms come to an end this year.

Ireland, Norway, and Canada were contenders for the two seats on the UNSC. They are part of the Western and Others Group, known as the WEOG, one of four regional blocs from which candidates are drawn. The WEOG is unusual in that geography is not the sole defining factor; Europe is divided between the WEOG and the Eastern European Group. The WEOG also includes Canada, Australia, New Zealand, and Israel.

While both Ireland and Norway were successful, securing 128 and 130 votes respectively, Canada received 102 votes but did not achieve the minimum required number of votes. This is the second time Canada has failed to secure sufficient votes for a seat on the UNSC - it lost its bid in 2010.

In addition to Ireland and Norway, India, Mexico, and Kenya were also elected to non-permanent seats on the UNSC for 2021-2022. They will join the five permanent members - France, Russia, China, UK, and USA - and continuing non-permanent members Estonia, Niger, St Vincent and Grenadines, Tunisia, and Vietnam.

Cooperation among European countries France, Germany, Belgium, and Estonia presently on the UNSC has been strong. It can be expected that the European nations on the UNSC in 2021 will continue that record. Non‑permanent members Norway, Ireland, and Estonia, together with UNSC permanent member, France, will represent an influential European group to promote peace and security and to uphold democracy, the rules based international order, and human rights.

Security Council members have a prominent voice on issues of peace and security. The Council’s resolutions are binding, although many are not enforced. It is the only UN body authorised to approve the use of military force and it is empowered to refer cases of genocide and other crimes against humanity to the International Criminal Court for prosecution.

Ireland and Norway have well respected credentials. Norway was a founding member of the United Nations in 1945. It has the notable distinction that the first Secretary-General of the United Nations was Norwegian - the former Minister for Foreign Affairs, Trygve Lie. Norway has been elected to the UNSC on four occasions for two-year terms -1949-50, 1963-1964, 1979-1980, and 2001-2002. While Norway is a member of the European Economic Area Agreement and other bilateral arrangements with the European Union, it is not a member of the EU.

European Union member, Ireland, joined the United Nations in 1955 and its membership has been a central pillar of its foreign policy since that time with its emphasis on multilateralism, peace, human rights, and development assistance. Ireland has an impressive record of contribution to UN peacekeeping around the globe. Since 1958, it is the only nation to have a continuous presence on UN and UN-mandated peace support operations. On three previous occasions, Ireland has held a seat on the UNSC for two-year rotating terms in 1962, 1981 and 2001. The former President of Ireland, Mary Robinson, served as UN High Commissioner for Human Rights from 1997-2002, followed by Ireland’s membership of the Human Rights Council for the period 2013-2015.

Norway’s established credentials include taking the Chair of the Hague Code of Conduct against Ballistic Missile Proliferation in June 2019. Norway’s role has been important in the lead-up to the 2020 Review Conference of the Treaty on the Non‑Proliferation of Nuclear Weapons. A member of NATO, Norway also chairs the international work on nuclear disarmament verification and became a member of the Board of Governors of the International Atomic Energy Agency in late 2019.

Ireland has been a long-term actor involved in disarmament as part of the Core Group of Negotiators on the Prohibition of Nuclear Weapons. The Nuclear Non‑Proliferation Treaty originated as an Irish initiative at the UN General Assembly in 1958, and Ireland was the first country to ratify the Treaty. Ireland’s stated position is to refocus disarmament in the context of humanity, rather than in isolated abstract security terms. It supports disarmament and arms control within the scope of sustainable development, conflict prevention and peacebuilding, and the implementation of the actions set out by the UNSC. It has committed to engage actively and constructively in its national capacity, as well as with the EU, New Agenda Coalition, the Vienna Group of 10 and other like-minded partners.

Ireland’s bid for a UNSC seat was part of a long-term strategic vision to increase its global profile, influence, and position, and to act as a buffer in a post‑Brexit world. As a small neutral state on the far west of Europe, Ireland’s ambitious strategy was to expand on the capacity of smaller states to shape the international community and, in so doing, focus on Ireland’s place in the world.

Estonia joined the United Nations in 1991 after it declared independence from the Soviet Union and was elected in 2019 for the first time to hold a non-permanent seat on the UNSC for 2020-2021. Estonia supports and promotes a world order based on common rules and international law. The UN was founded on the principle of equality of all its members and, as a small state, Estonia supports this principle as an important prerequisite for stable relations between states.

Estonia, together with Norway and Ireland will be particularly effective in giving small states a voice on the UNSC to maintain global peace and security. They are not intimidated by larger and more bellicose nations. In April 2020, following an announcement by US President Trump to halt funding to the World Health Organization (WHO), Ireland announced it would quadruple its contribution to the WHO in efforts to coordinate a global response to combat the global pandemic COVID19. Ireland’s Minister for Health stated at the time, ‘Now is not a time for countries to be taking pot-shots at an organisation that is working on a global level to save lives’.

Article 23(1) of the United Nations Charter requires that when voting for non‑permanent seats to the UNSC, due regard must be ‘specially paid, in the first instance to the contribution of Members of the United Nations to the maintenance of international peace and security and to the other purposes of the Organization, and to equitable geographical distribution’. It is apparent that the General Assembly voters took this into account during the current pandemic turmoil, and the likely uncertain and turbulent global times.

A seat at the UNSC provides an opportunity to respond to and to shape global affairs as well as providing opportunities to pursue individual international agendas, profile, and standing. The past records of Norway and Ireland in the United Nations together with their reputations for integrity and impeccable credentials as advocates of UN values, added to the capabilities of France and Estonia will ensure that Europe’s influence remains strong on the UNSC. The global community can expect them to bring valuable insights and balance to the Council discussions, and to influence positively its future decisions about global peace and security.