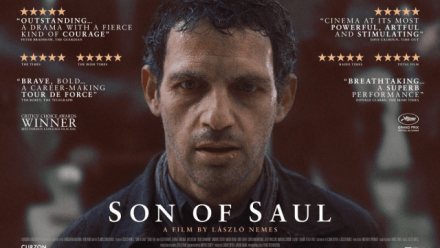 The ANU Centre for European Studies will join the Embassy of Hungary and the Embassy of Germany in marking the occasion of the International Day of Commemoration in Memory of the Victims of the Holocaust on 10 February at the Kambri Cinema at ANU.

ANUCES Director, Anne McNaughton, will welcome Ambassador of Hungary, H.E. Dr István Mikola, and Ambassador of Germany, H.E. Dr Thomas Fitschen, and other guests to a screening of the film Son of Saul (2015) by László Nemes. This event is associated with Dr Kasia Williams’ new Jean Monnet project Remembering Across Continents (2020-2022), delivered with the support of the Erasmus+ Programme of the European Union.

Son of Saul is a 2015 Hungarian Holocaust drama directed by László Nemes. This stunning and overpowering movie won the Grand Prix award at Cannes and the best foreign film at the Oscars. It reopens the debate around the Holocaust and its cinematic thinkability.

The movie takes place almost entirely in Auschwitz-Birkenau, late in the Second World War and follows a day-and-a-half in the life of Saul Auslander, a Hungarian member of the Sonderkommando.  The Sonderkommando occupy an especially painful and contested place in the history of the Holocaust. Slave laborers like nearly everyone else in the camps who was not immediately killed, they had the job of shepherding their fellow Jews to their deaths and cleaning up afterward, sorting through clothes, eyeglasses, jewelry and other personal effects and burning the corpses. They were rewarded for this service with meager privileges that included improved rations and the postponement of their own inevitable deaths.

László Nemes’s debut dramatizes the concentration camps with great intelligence, seriousness and audacity. His technique answers the traditional objection - Jean-Luc Godar said cinema’s great failure was its failure to show the Holocaust - to the extent that this is possible, with his closeup approach on the face and a method that allows fiction and the individual subject to take some of the weight of horror and history. The haunting vision of the hell inside Auschwitz can be seen through the eyes of a prisoner who is forced to help in the gas chambers.